Education was very important to the Ancient Romans. The rich people in Ancient Rome put a great deal of faith in education. While the poor in Ancient Rome did not receive a formal education, many still learned to read and write. Children from rich families, however, were well schooled and were taught by a private tutor at home or went to what we would recognise as schools. In general, schools as we would recognise them, were for boys only. Also, Roman schools were rarely an individual building but an extension of a shop – separated from the crowd by a mere curtain!

Learning in Roman schools was based on fear. Boys were beaten for the slightest offence as a belief existed that a boy would learn correctly and accurately if he feared being caned if he got something wrong. For boys who continued to get things wrong, some schools had a policy of having pupils held down by two slaves while his tutor beat him with a leather whip.

There was not a great deal of subject choice in a Roman school. Therefore a boredom threshold must have been quickly reached by children. This must have been made worse, by the fact that the school day was longer than children now are used to. It seems likely that during the school day, a child would rise at sunrise (not wanting to be late as this would lead to a caning), work all day with a short break at lunch, and then home to be in bed by sunset for the next day. Lessons were simply learned by heart. Children did not need to know why something was right – only to know that it was right and that they would escape a beating. Lessons were also simply dictated as there were no books as they were simply too expensive.

There were two types of schools in Ancient Rome. The first type of school was for younger children aged up to 11 or 12 where they learned to read and write and to do basic mathematics. At these schools, children worked on an abacus to learn basic mathematics. For writing, they used a stylus and a wax tablet. Older children would go to more advanced schools where they did specific studies on topics such as public speaking. They would also study the writings of the great intellects of Ancient Rome such as Cicero. Girls rarely went to these schools as they were allowed to get married at the age of 12 whereas boys had to wait until they were 14 to get married. 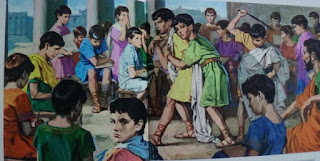 Children worked a seven-day week – there was no break for the weekend! However, this was not as dire as it appears. There were many school holidays – religious holidays (and there were many of them) meant that children did not have to go to school. Market days also resulted in school closures and children also had a summer holiday!
In general, girls did not go to school. Girls from rich families did receive an education, but this was done at home. Here they were taught how to run a good household and how to be a good wife in general – in preparation for the time they got married. Part of their education would have been music, sewing and the competent running of a kitchen.

For boys, practice made perfect. They were not allowed to write on what we would consider to be paper as it was very expensive. Boys first practised on a wax tablet. Only when they had shown that they could write well, were they allowed to write on paper – which was made on the Ancient Egyptian method of papyrus reeds. Their ‘pens’ were quills and their ink was a mixture of gum, soot and, sometimes, the ink from an octopus.